The GM2 engine of the VR consists of:
– the 256 standardized Roland GM2 sounds (which are listed in the VR09 midi implementation manual)
– plus ca. 500 ‘undocumented’ sounds, e.g. very fat analogue synth patches.
– a series of GM2 midi controllers (documented in MIDI) that can be used to modify the sounds in a live performance.

‘Midi song files’ (e.g. for Karaoke) are usually using the ‘GM’ standard. If you play a midi song file via the VR usb drive, it interacts exclusively with the VR GM2-engine, with 128 GM sounds and GM/GM2 controllers (e.g. a ‘vibrato’ on a guitar sound)

III. How to find & select the GM2 sounds on the VR:

The most comfortable way is to use the CTRLR V-Combo EDITOR: it has a ‘SOUND-GM2’ section that allows to load any GM2 sound into either a ‘VR keyboard engine voice’ or a ‘GM2 midi channel’ and has ‘controllers’for modding the sounds. In the Editor, switch to ‘SOUND’, then [SOUND-GM2] Tab and select the ‘SOUND ENGINE’

If you want to do you own thing (e.g. program something for IOS), you can get the GM2 program change data for the 300 ‘official’ GM2 sounds from the ‘VR midi implementation manual’ (Roland website).
Note that the CTRLR Editor lists the official sounds PLUS additional sound banks with ca. 500 ‘identified’ sounds – and offers GM2 modding (filter, envelope, etc) and saving of modded sounds.

This is probably the most easiest way to perform GM2 sounds but requires to run CTRLR EDITOR as a ‘live utilty’ during the performance.
CTRLR EDITOR allows to ‘upload’ GM2 sounds into the VR keyboard engine
You can either load GM2 sounds manually using [SOUND-GM2] tab of EDITOR or use the ‘MidiMapper’ to automatically load a GM sound when a VR registration is recalled.
Both methods allow to apply the complete set of VR ‘keyboard controlers’ (filters, envelopes, EFX, portamento, sustain, etc etc- short: all the knobs you can wobble on the VR board or in the EDITOR – and which can be saved to a registration).

Using GM2 sounds with the GM2 engine also requires additional “gear”: a 2nd ‘midi keyboard’, a computer running a DAW, a midi-router or CTRLR EDITOR, an external sequencer etc. Or you can plug a midi cable from VR midi out to midi in and send program data and key on/off from the VR keyboard to the GM2 engine (see below and remark the WARINGS)

To load GM sounds into the GM2 engine there are several methods:

To play GM sounds there are several methods

We’ll discribe the ‘VR registration method’ for sound loading and the ‘midi bridge cable’ for playing on the VR as this can be used ‘on stage’ without additional gear (tablets, laptops, midi keyboards etc):

The VR registration program changes can be used to load a GM2 sound to the VR. For this purpose, the VR needs to send the program changes ‘to itself’. This is possible by:
a tablet/laptop and a ‘midi-router’ software
the ‘midi bridge’ cable between VR MIDI OUT and IN

The loaded sound can then be played by on the VR keyboard itself. With other words: you can prepare ‘registrations with a GM sound’ and use them on stage

or: how to play a GM2 sound without external gear 🙂

(A) AT HOME: prepare the VR registration using the editor

Before first use of ‘VR GM registrations’  all TxMidi Channels for all registrations must be set to ‘dead channel 16’: TX (‘transmission’) midi channels are the channels on which the VR sends midi note on/off messages through its midi out jack.
With the bridge cable in place, the VR will send note on/off signals to itself
This means that registrations with default TxMIDI channels (e.g. channel 4 for upper manual) will receive the same note on/off twice (directly from keybed + via bridge), re-triggering each note and resulting in awful sound artefacts.
To avoid this all non-GM-registrations have to be modified by setting the TX channel of each manual to channel 13.
In MIDI MODE 2, channel 16 is a ‘dead channel’ and all note on/offs send to it end in Nirvana.
You can change all registrations by hand using the VR-menu ‘MIDI’ – or use the CTRLR EDITOR special feature introduced in  version v1.12.12: export your registrations to an upg-file, load the file to the EDITORs  ‘upg editor’ tab, treat each registration with the new ‘[GM2] sil’ button, save the file back and reload it into the VR (this might sound complicated but it’s done in 10 minutes) 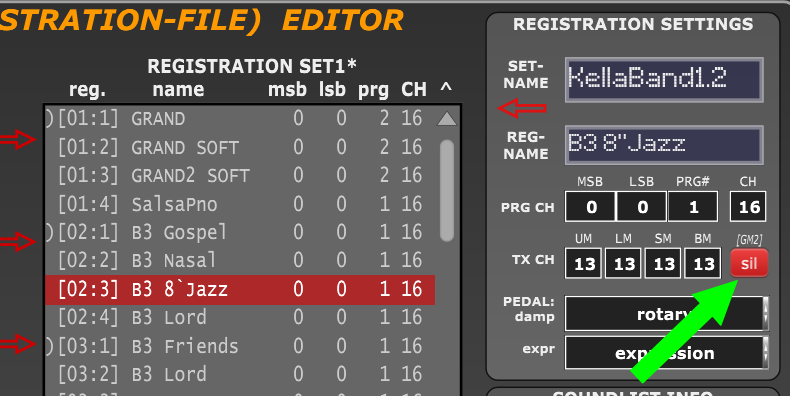