Probably one of the most common ‘complements’ to the VR is a stage piano, especially as the VR acoustic pianos sound anything but good.
This aricle sheds light on the technical aspects of stage pianos, the difference to real acoustics, presents an overview of ‘stage piano hammer actions’ and terminates with a BUYERS GUIDE

With dozens of stage pianos on the market you are spoiled for the choice. How do you decide? You can:
– listen to a sales representative or YouTubers – feeding you with superlatives cool, great, amazing, fantastic, best ever…
– ask friends or VR colleagues  – many of whom will swear that ‘their’ piano is best
– get an insight in stage piano technology and get an idea at which features to look at before taking a buying decision

We go for the last and start with the question: what is a ‘stage piano’? Basically it’s a mobile digital piano that

Now let’s take a look at the two fundamental aspects of a digital (stage) piano: the piano sound and the piano-like keybed, also called ‘action‘:

A good piano sound has:

On digital pianos we find 3 types of actions:

As synth-type actions are evident in their ‘working principles’ and the huge and heavy hybrid actions out of scope for ‘stage pianos’ we concentrate on the (simple) hammer actions that are used in entry-to-mid level digitals and stage-pianos:

This ‘3 parts-per-key’ mechanics does not have much in common with a real piano or hybrid action. It’s in fact a construction that just tries to emulate the feel of a ‘Grand’ action. Although being so simple, there are differences in the way simple actions work:

Texture of the keys

Real piano keys have a ‘rough’ textured surface: in former days ivory was used to cover the wooden keys (today keys are covered with synthetic materials or …. mammoth teeth!) . The texture makes the key feel ‘warm’ and ‘unslippery’. Very basic (cheap) DPs, generally the ‘synth-action’ type (e.g. Yamaha NP series), have a polished surface without any texture: the keys feel ‘cold’ and slippery (especially with sweat and grease from the hands).  Hammer-Action type DPs normally have textured keys. In the Yamaha GHS action (e.g P115 and P125) the white keys are polished and the black have a light texture

In a real piano, the hammers of bass keys have more weight (more inertia for strong hits on the bass strings) than those of the treble keys. This is called graded (or scaled) action. The weight does not change continuously over the 88 keys but is grouped in ‘zones’: groups of keys with equally weighted hammers. Acoustic Grands have e.g. 7 zones. The majority of digital pianos also have graded actions. A few actions have ungraded actions where all hammers are equal, e.g. Medeli K6 action and Yamaha BHS action (used in CP73 stage piano): this is not necessarily a downsizing: ungraded actions are lighter, reducing the weight of the piano, and are better suited for playing synth sounds (e.g. in the ‘multipurpose’ instruments).

Behaviour of the action

The ‘feel’ – or behaviour of an action is the very first impression a potential buyer gets: are keys hard or easy to press? How do they rebound? How fast can I do repetitions (‘trills’)? Do I feel fatigue? etc. There are technical parameters for all those points but finally it’s much of individual ‘taste’. Some aspects:

Between the ‘rest point’ of a key (at 0mm key travel) and its end point (at ca. 10mm of key travel) there are points where something is ‘happening’:
On an acoustic piano the ‘action points’  in relation to key position measured to rest position are :
– key down movement:
1. the damper comes off the strings at ca. 3-5 mm
2. the escapements releases (the hammer ‘leaves’ the key and starts its free flight against the string) at ca. 7-8 mm
– key up movement:
– the escapement re-engages (hammer and key are recoupled) at 1-3 mm or 7-8 mm depending on escapement mechanism
– the damper resettles on the strings at ca. 3-5 mm
Damper on/off is pretty clear, but what is escapement (also called ‘let-off’) ? In acoustic pianos, the escapement is the position where the hammer separates from the key (and starts its free flight towards the string) or re-engages when the key is released. On release, if you don’t lift the key above the escapement, the tone cannot be retriggered (you can push the key but there is no sound).

In a ‘simple escapement’ action (e.g. Uprights) the escapement is such that the key has to be released to (nearly) rest position to re-engage with the hammer.
Actions of Grand pianos have a (complex) ‘repetition mechanism’, also called double escapement: the key has to be lifted only 2-3 mm to re-engage hammer and key, which means that repetitions (‘trills’) can be done much faster because the key does not have to travel back the whole distance to rest position. As long as you play (trill) the key between the damper point and escapement point  (ca 2-3 mm) the previous note is not damped, e.g. you can make trills on a permanently sustained note.
Nearly all digital pianos try to imitate the behaviour of ‘Grand’ pianos (only a few ‘hybrids’ that imitate uprights).

In digitals the key positions (actions) are captured by pressure sensitive sensors. There are two types of sensor key position capturing:
double-sensor and triple-sensor

In triple (3-) sensor actions, one sensor captures the key position of damper on/off, one the position of escapement (‘note trigger’) and the third the position of ‘repetition’ (double-escapement)
In double (2-) sensor actions,  key position for the damper and ‘repetition’ (double-escapement) are captured by the same sensor, which means it’s not possible to play a ‘sustained’ trill between the key positions of damper-action and escapement
The following table shows the typical key positions (with respect to rest) for acoustic (AP) and digital (DPS). In the last line is shown the concrete values of the Casio Tri-Sensor Scaled Hammer Action II that is used in the Privia and Celviano stage and home pianos (sensor number in brackets):

Not only the number but also the position has an impact on the reaction of an action: for 3-sensor action there the following types:

Which configuration is the best – most ‘realistic’? Well – in all higher spec actions it’s the hammers that push on the sensors. In theory you can ‘short kick’ a key that then throws the hammer against the sensors. With sensors activated by key only the key always has to be pressed to the latest sensor. On the other hand, the ‘damper’ is clearly directed by the key, not the hammer. From this considerations, sensor type ‘3’ should be the ‘most realistic’ (only realised on the Casio Action I’)
The questions is: are those details really important on the rather primitive DP actions???

In recent years ‘escapement simulation’ became a big hype in marketing. As explained above, in an AP escapement is when the hammer detaches from the keys push mechanism. Mechanical friction in the mechanism implies a small resistance in the keys way down at ca. 2-3 mm above end position.
That resistance is not necessarily something one desires: on worn out pianos that friction could be so high that a slowly pressed key gets stuck.
What is the ‘Escapement simulation’ on digital pianos? In lower grade actions (e.g. Roland PHA4 standard, Casio) the ‘friction point’ is simply the elastic resistance of the silicone contact strip of the sensors. Despite what the PR guys claim the effect of this ‘simulation’ is squashy and barely noticeable. Higher spec actions (e.g. Roland PHA4-concert, Kawai, etc) add a device in form of a little rubber nipple or tongue, that, by passing, emulates a ‘friction point’. 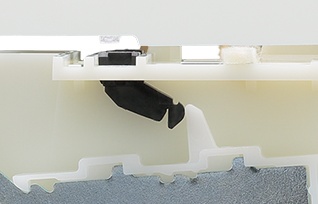 The next table shows actions used in recent years on stage pianos, ordered by ‘complexity of construction’ and ‘level’.
Note 1: in column ‘escapement sim: ‘crs’ = contact rubber strip (see previous paragraph)
Note 2: the same actions might feel different in a different DP model: this can be due to model specific variations (e.g. different spring rates) or simply because the actions feels different because of a different housing

Marketing speech tries to make you believe that stage piano actions feel like ‘real’ acoustic pianos. In fact none of those ‘primitive hammer action wannabees’ fully reproduce the complex feedback of a real piano – the ‘touch’, the rebound, the repetition, the tone-modulation, etc. etc.
So the most important is that you ‘feel good’ with the digital piano action (that’s not different from real pianos – just another level…)
In order to find ‘your’ action you need to go to a lot of stores and do even more hours of testing

Some advice for testing:
– do A:B testing. Use your own headphones to have a reference. The headphones should have a ‘classical’ frequency response with clear highs to properly resolve details
– don’t noodle around, instead play songs that you know: noodling hides sound issues !
– if you’re an organ or synth player you might have ambition to learn ‘classical piano’: try playing some simple pieces, like Satie Gymnopedie
– do ‘sound tests’ with single chords and single notes
– test EVERY single note: do notes sound bizarre ? (ex.: RD 2000 has a A6 note that sounds terribly false – and VR09/730 has a lot of them 🙂 )
– turn volume off and play the action without sound – the action will eventually feel completely different – do you like it?
ask yourself:
– do I like the tactile feel (texture) of the keys?
– do I mind the mechanical noise of the action? Does it really bother me?
– do I hear sample loops (not everybody can hear them!) and if so, do they annoy me?
– are the tone decays long enough?
– do I like the overall timbre of bass/mid/treble tones?
– can I hear ‘sound artefacts’ that annoy me?
– do I have problems (because I play a lot ‘in the keys’) with short pivot length (see table of actions)?
– are fast repetitions (‘trills’) part of my playing style and if so can I perform them on that action?

The following table is an overview of lightweight (max 15 kilos) stage pianos in the sub-1000 USD/Euro range, that are good complements to a VR organ

Most of the listed models have build-in speakers: due to their low volume those speakers are not suited for stage (even not as monitor) but could be useful for practicing at home or performing a birthday song to your beloved mother-in-law …

“On youtube VR acoustic pianos sounded great – I bought it and now I’m disappointed”: youtube reviews are made to sound great – by noodling with the sustain pedal permanently pressed – the bigger the chords and the more the sustain, the better it hides ‘the true sound’

“Roland FP10 (30…) has the new amazing PHA-4 action” : fact – it has a PHA-4 ‘standard’ which is a renamed ‘Ivory-Feel-G’ entry level action which (when Feel-G was still called Feel-G) was regarded as ‘oufff’-action… PHA4-standard has nothing to do with PHA4 ‘concert’ or ‘premium’.

“OMG the action has escapement simulation”: well, on the cheaper actions (GHS, PHA4-standard, Casio etc) what you feel as “escapement point” when pressing down a key is simply the “squeezing” of the silicone contact strip (higher grade actions have a mechanical device). In that regard ANY keybed has ‘escapement simulation’ (even the worst synth action….)

“Roland PHA 50 has WOODEN KEYS” : no – it has full plastic keys – with thin wooden side covers for a nice look (ditto: Grand Concert)

“Casio Tri-Sensor Scaled Hammer Action II has much improved over Tri-Sensor I and feel it”: really? Both actions are a carbon copy (same frame, keys, hammers, probably same grease…). The only difference: in Action II, Casio economised one of two sensor boards present in Action I by placing all 3 sensors on one board…

“Casio CDPs have the ‘Scaled Hammer Action II’ from old PX”: even if it’s called “SHA II” it’s nearly identical to the new ‘Smart Action’ – nearly, because “SHA II” has no proper frame but all parts are directly mounted into the case …