The keybed of the VR09 is a special Roland design called ’rounded shape’ which means that the top of the black keys is not flat but slightly rounded and keys are narrower than standard piano keys.
Some people have problems of slipping off or even missing those black keys.

A way to improve is by flattening the black keys top surface with sandpaper, also adding roughness for more finger grip. Optically, the mod makes the keys look like ‘real’ piano keys with a ‘ebony texture’.
Take 80 grain sandpaper, fix it on a wooden (or metal) block and slowly grate the keys in length direction from the rear to the front, Pressing the block onto 2-3 keys at the same time helps for horizontal adjustment. You can take off some tenth up to 1/2 mm from the keys

The picture below shows the black key ‘sandpaper mod’ (uncleaned). The (diffuse) white key ‘acetone-mod’ cannot be visualized on photos 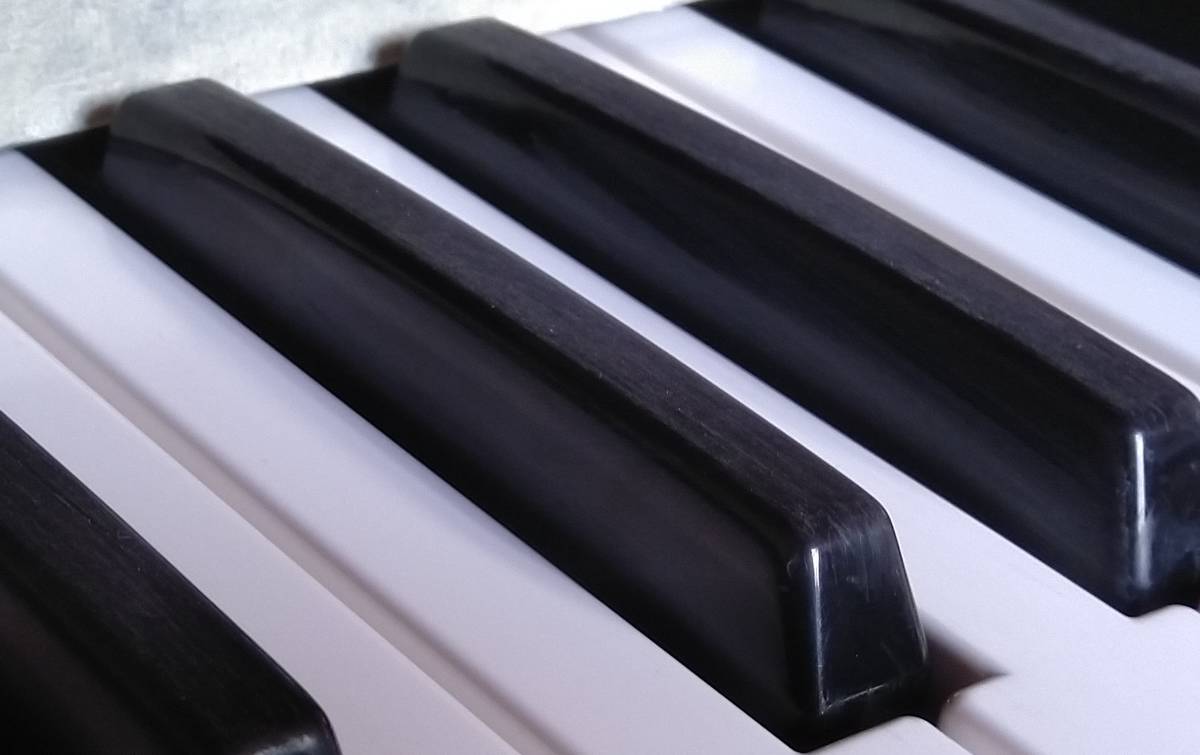 This mod adds key weights to each key: this reduces the down force (‘touch weight’), changes the ‘rebound behaviour’, adds ‘inertia’ to the keys – and slightly changes the noise of the keybed (to the dark side…)
First we analyse the down forces of the original keybed by stacking ‘motorcycle wheel rim balance weights’ or cent pieces on the front end of a key and measuring at which weight (in grams) ‘keybed actions’ happen:

Ca. 70 grams ‘down force’ for triggering a piano note is a lot – especially as the keys have no inertia that helps with acceleration. For sure this is ONE reason why the VR09 keybed is not very appreciated by players

To reduce the down force, tests were made with different weights added to black and white keys:

5g for black+white keys are nice for playing piano, EPs etc but feel a tiny (really tiny!) little bit slow for fast synth solos compared to the unweighted keybed
5g for the white and 2.5g for the black could be a compromise for a more ‘synth’ orientated keybed

If you think adding key weights do tests before irreversibly glueing weights into each key: use (removable) duct tape to provisionally glue the weights on 2 octaves, each octave with different weights (e.g. one with 5g, one with 2.5g) to ‘feel the difference’. Play the keys without sound to get the pure feel. Try with both hands.

If you decide that it’s worth the effort and you’ve found your ‘personal weights’, open the VR and remove the keybed as described in Open VR09.
Remove the keys (it’s quite easy): take the spring off and pull the key slightly to it’s front side.
If you remove-modify-remount ‘octave by octave’, you avoid a big pile of lose keys (BTW: there is NO NEED to note key numbers: every octave has the same set of key types).

Fixing the weights in the keys: ‘rim weights’ (see below) have a strong adhesive layer on their back side that should fix the weights for many years. Otherwise use epoxy glue. Don’t forget to de-grease the keys where the weights shall be placed with alcohol.

Maybe the easiest way is to buy a pack of ‘balance weights for motorcycle rims with adhesive tape’: cheap (ca 5 Euro/USD for 61 weights), easy to get (ebay) and easy to mount.
Our VR friends from France had an even more simplistic solution: steal nuts !